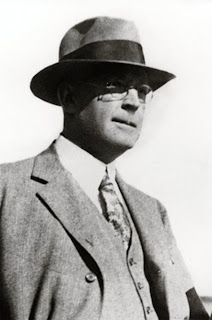 Overview: Seth Raynor, an Engineer, was originally hired by Charles Blair MacDonald to help him lay out The National Golf Links of America. MacDonald was so impressed with Raynor that he hired him to supervise the construction of the National. MacDonald had brought back a series of ideal holes and hole concepts while traveling all over the United Kingdom preparing for the National. All of these concepts had to be adapted to suit the terrain at the National and Raynor quickly displayed the skill in figuring out what land that needed to be altered to achieve MacDonald’s vision. It was Raynor’s ability to understand the cut and fills required and organize the men to carry out the task that made him indispensable to MacDonald. Raynor had also found something that was really exciting and knew this is what he wanted to do. 
MacDonald and Raynor continued to work together in this arrangement at a series of other courses including Piping Rock and Lido. Raynor dutifully followed every direction that the overbearing MacDonald gave and used this opportunity to learn a great deal about golf architecture. Raynor’s role slowly grew as MacDonald grew less interested in golf architecture and he began to make more and more adaptations on his own. In 1915, at MacDonald’s encouragement Raynor set out on his own. Through MacDonald’s wealthy contacts and through his recommendation he was able to create a string of great courses working with wealthy clients throughout the United States.

Praise for the work: Raynor’s routing skills was outstanding the consistent quality of his courses is a testament to that skill. He had a knack for finding great natural holes and combined them with concept ideas to make even more interesting holes. He also managed to find great natural location for full template holes and weaved these into the routing to become a highlight of the course. His past experience with adapting MacDonald’s holes was put to great use adapting his own holes into the land. The main difference being that Raynor was often more subtle than MacDonald with many of the adaptations being a little more restrained. The one great exception to this was Raynor’s desire and ability to combine one or two additional concepts onto one hole creating many of his greatest holes.

A great example of this is The Creek Club’s 6th hole where the hole tumbles naturally down the great hill with the Ocean in the distance. The greatness of the hole comes from the green site that he not only found, but manipulated in order to create a reverse redan and punchbowl green combined. It is one of the most unique and entertaining green sites in all of golf. The Edan at Camargo (courtesy of GolfClubAtlas)


Criticisms: The criticism for Raynor will always be that he was always working from the design ideas of MacDonald, and while he created a few unique holes, he was largely working from a template. This approach means that Raynor courses can begin to feel similar, in particular the collection of par threes that sometimes follow the exact same formula for all the holes. The only reason I don’t have him higher on my list is the fact that I have trouble separating his skill from the architecture of MacDonald.

Favourite Course: Fishers Island
How many courses can boast the combination of an Alps holes, with a punchbowl green, all set along the oceans edge. There may be a greater collection of architecture at other courses, but the setting is certainly unrivalled in all of his work. There are great examples of many of the classic templates, but so often they are either along the ocean, occasionally over the ocean and at least looking out to the ocean. It does make you wonder what Cypress Point may have been like if he hadn’t died after his first visit to the course The Alps Punchbowl at Fishers Island (courtesy of GolfClubAtlas)


What I take from him: It has often been said there are no new ideas, just new adaptations of old ideas – perhaps Raynor is still underestimated after all this time. The ability to adapt concepts is the foundation of great architecture. There was not a more skilled man when it came to taking a full concept and reintroducing it over new terrain or establishing it into a completely new setting. The holes manage to fit wonderfully over any terrain despite the often rigid nature of the architecture which is a testament to his awesome skill.
Posted by Ian Andrew at 10:51