Our Last Father and Son Trip 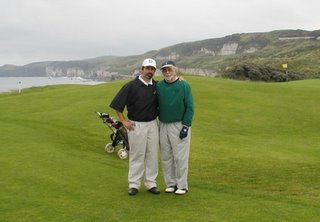 At dinner in Portrush, my dad offered the simple statement, "This will be my last golf trip"
My father is the reason I play golf, and more importantly the reason I became a golf course architect. As early as age 13, (which he confirmed again this week) I wanted to be a golf course architect. My father taught me how to play – not easy for a man who averaged 150 days away from home each year. More importantly, he taught me about the game itself. His passion became my passion, a gift from father to son.

When he realized that my obsession with golf design was more than a passing interest, he bought me architecture books to begin my education. But that still was not enough for me. So he began to plan family vacations around particular golf courses. Mom never figured out that a family trip to Nova Scotia was planned so that Dad and I could see Thompson’s great Highland Links. But she caught on to us when we went to Pinehurst. She realized that golf would become an intricate part of family holidays in the future.

What she did not realize was that Dad and I were about venture out on our own, leaving her behind (well in London with her sister, actually) as we toured the great links of England and Scotland. For my father, this trip was a return to see old favorites. For me, it was a pilgrimage. And a logical next step in Dad’s plans to educate me about great golf design.
In Scotland, I fell in love with a version of golf that was far superior to anything I had seen before. I personally don’t feel an architect is completely educated without seeing those great links. This was also the trip where I insisted on paying my own way and discovered that golf travel is expensive. 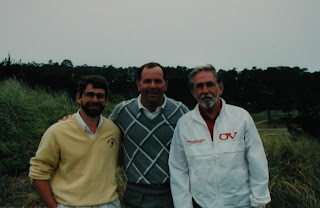 A few years later, it was my turn to treat Dad. We headed off to Pebble Beach, where I surprised him with a round at Cypress Point (still his favorite day of golf ever – must have been that O’Meara fellow that joined us). It was then when we hatched the idea of heading to Ireland. Ireland was to be our next golf journey, and the final leg of our series of trips together.
When I began working with architect Doug Carrick in 1989, Dad and I began to talk seriously of going to Ireland, but then I got married and bought a house. I decided to take a few years to get established. We talked about it again, but soon Cindy was pregnant, and I was too afraid to go before Cameron was born. We were finally planning the trip in the late 90’s when my Dad got skin cancer for the first time. He had to have a large skin graft that restricted his movement and was unable to play for a full year. Fine, I thought, we’ll go next year. Dad was treated and was fine, but strangely (to me) chose not to play. It was the first year we had not played together since I was 14 years old.
The following year he had a second brush with skin cancer that required more surgery. I waited for him to recover, and get a clean bill of health. He didn’t play that year either.
I mentioned to him that I had an offer for him to play Cypress Point the next year. I thought that would entice him, but he told me he was not interested. He thought I should go without him. I was stunned about how uninterested he was with golf, and couldn’t bring myself to go there without him. (I wrote a thread on his disinterest in golf many years ago to which a couple of you sent wonderful responses). The trips had always been about us being together, with golf as the perfect backdrop. I waited another year before he began to play again – much to my great relief. We played at a series of courses that Carrick Design had built or had done renovations on, with a late season round at the first course that I could say that I built. He immediately recognized homage to Pinehurst #2 (public course with wide fairways and heavily contoured greens), and it amused him to know that the trip we had made those years ago had that much effect on me. It was a wonderful moment for both of us.

I have recently started teaching my oldest son the game because he has asked to play. I always feared introducing him to golf, afraid that my own desires to experience a similar father and son relationship based around golf would pressure him. Carrying that expectation would be an unfair burden upon him, I believed. But once he asked, I arranged for Cameron’s first game of golf to be with his grandfather and I. We were in Florida at a small public course. It was fun for my father to realize that the game was being passing down through three generations – that golf was something he shared not only with me, but also with his grandson. My father gave my son the same basic lessons he had given to me, and got Cameron to strike the ball surprisingly well. I just watched with a large smile on my face.

Recently, I brought up Ireland again with Dad, and the planning began years after we were supposed to go. There were times during those years that I was filled with regret, afraid we had lost our last chance to go, especially after reading Dodson’s wonderful book "Final Rounds."
Then, after weeks of planning and scheduling, the time had come for me to leave. My parents were in London visiting family, and Dad and I were to connect at the airport in Dublin. Dad was 77 and I was 3 days past my 40th birthday. We had 10 rounds arranged over 7 days - it was up to him how much we played. I left for the Toronto airport on a Friday evening with tickets I had purchased over the internet (off the Air Canada website) months before, only to be told that the plane was oversold my 43 seats and that my ticket – being an internet sale – was valued at less than other tickets. I was number 34 on the stand by list. It was the last plane to Dublin for 2 days.

Devastated, I explained to the attendant about my plans and how my elderly father would be waiting for me at the airport in Dublin, and how I had no way to reach him. The attendant, though sympathetic, could not do anything to help me.
To this day I am not certain what happened, but somehow the stars aligned and I was permitted to board even though only 20 people of those 43 who were waiting were seated.
I won’t give details about anyone’s golf because ultimately, that didn’t really matter. It was the experience of spending that time with my Dad that made the trip special. But I will say with pride that my father had the lowest final round at Royal County Down (a perfect end to our travels), and had more deliberation in his stride than I had seen in years. He played 9 of the 10 rounds too!

A week together in Ireland allowed us to reflect on all our trips together, his life, and the game of golf itself. There is no other game that can be enjoyed through the generations like golf.
Ireland will be our last golf trip together. I thought writing that would make me sad, but it does not, because we made it! We made it to Ireland.